Montana was a rainy drive, but the pine-laced mountain highways were still breathtaking with the misty rain clouds slaking down the hills.  Idaho, a state I never thought much of, was a pleasant sliver.  Cour d’Alene is a quaint town with a beautiful waterfront.

For those of you who didn’t think Idaho was cool.

The rain started back up for a bit, but cleared as I pulled into Spokane and the great state of Washington.  I curved through the hillsides and up through the Cascade Mountains where I settled myself for the night among a sea of wind turbines at a rest stop.  Quite beautiful.

It should be known that taking one million pictures is no where near as breath taking as the western landscape actually is.  Go west everyone.  And walk, bike, or drive so you can actually take it all in.

The next morning was another rainy one on the way to Seattle.  Seattle happened pretty quickly, all of a sudden I was just sort of in the thick of it, climbing up and down the hills in the city.  The big, big city.  The Pike Place Farmer’s Market really is a sight to be seen. 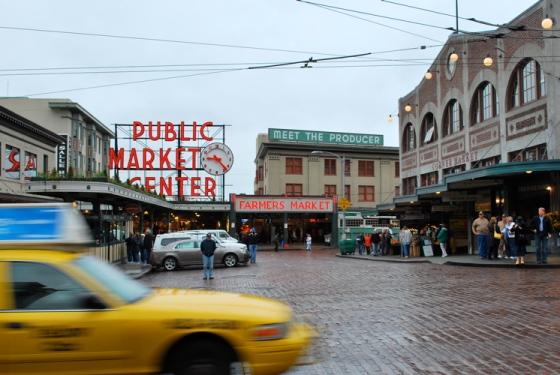 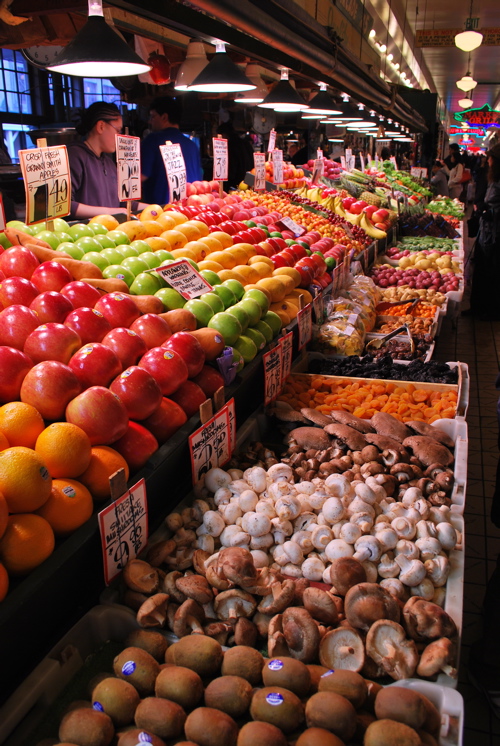 Vegan paradise. I want to live in swim that sea of produce. 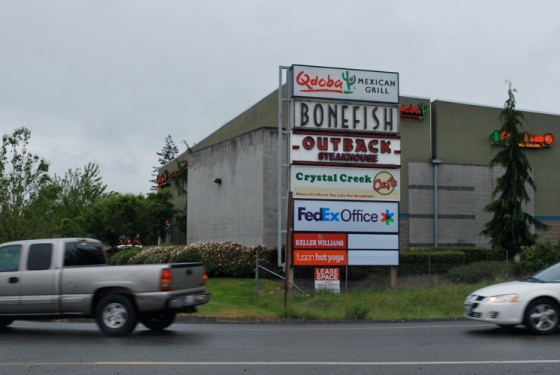 They had vegan cinnamon rolls at the market.  Amazing.  I spent the afternoon tooling around the city, sipping cups of delicious coffee, cursing the 10,000 Starbucks’, and debating whether or not to eat seafood.  I decided against it and ate an amazing meal at Plum Vegan Bistro.  Blue corn pancakes topped with a tofu scramble and fresh avacado.  I should have taken a picture, because the presentation was impressive.  Seattle is nice.  A nice place to visit.  I loved what was going on their with local food, vegan fare, the farmer’s market, etc, but I just don’t like the big city feel.  I continue to prove to myself that I am not a city girl.  I could do it, for sure, but I don’t really want to.  Give me the piney mountains over city streets any day.

After that I headed to a friend from Haystack’s place on beautiful Whidbey Island.  The Tomato rode a ferry for the first time.  So grown up after this trip, my silly little traveling Tomato.  Tracy has a beautiful home on the coast of Whidbey Island on Useless Bay, complete with a friendly bald eagle and it’s nest.  Tracy’s family, Laura (a fellow clay person, recent grad, and nomad), and myself had a lovely meal cooked by Tracy’s husband, Des, who is a chef.  My track record for having artist/chef families take me in for a night is 3-0.  (Do artists and chefs always hook up?  I could marry a chef… maybe an artist.  Then again, I could be an artist, or a chef.) After dinner we went for a nice little walk along the beach of Uselss Bay.  They call it that because the tide is so unpredictable.

Then I slept in their lovely guesthouse and woke up and took the most glorious shower of my life.  It seems that showers, which I usually despise, become incredibly desirable while on adventures full of long hikes, long drives, and a disgusting head of brambly hair.

We then visited Des’s coffee shop in little downtown Langley on the island.  They’ve got a great place.  He roasts all the coffee himself.  They have a garden where they grow various herbs, vegetables, and berries to use.  Des is also expanding the kitchen to feature dinners and a larger menu as well as a meat smoking area.  Industrious fellow, that Des.  Most of the shop was built and designed by artists, and a local metals artist made various structures, umbrellas, and tables for them.  It’s really a unique place with a great feel to it.  I wish I lived closer.  Useless Bay Coffee

While Tracy and I were chatting, a glass blower friend of hers, John, joined us and we talked about art, Africa, water, and life.  John was a good soul, and he gave me his card and said if I was ever in a pinch, I could give him a call anytime.  Good people on Whidbey.  I am a lucky and extremely grateful girl to be surrounded by such generous people.  Thanks to the Rock family for a lovely dinner, evening, and a very fragrant pound of coffee I’m sure I will enjoy and share with the folks on Orcas.

I’m on the ferry to Orcas now, a mere hour away from my final destination and the beginning of a new lifestyle for the summer… at least.  Jackie the farmer/potter/islander, at your service. 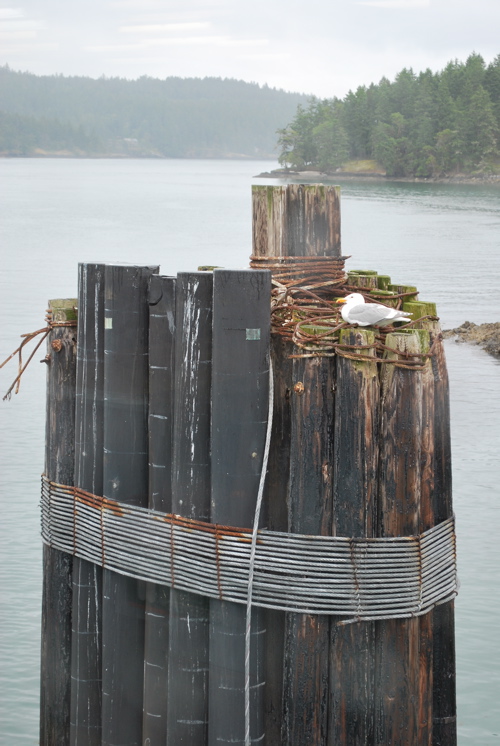 5 thoughts on “I’ve packed a change of clothes and it’s time to move on.”